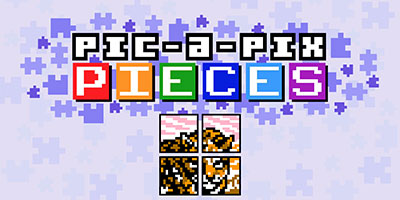 Pic-a-Pix is a picture logic game, sometimes known as Picross, Nonogram or Hanjie, where whimsical pixel-art pictures are created by solving puzzles.

In Pic-a-Pix Pieces, large pictures have been split into a number of smaller pieces. Each piece is a puzzle grid, and by solving them all you’ll form a mosaic that reveals a spectacular final image.

Play alone or solve puzzles with friends! Co-op play supports up to 4 players using any combination of controllers. Touchscreen controls can be used in handheld mode.

There are more than 300 puzzle grids, from 10×10 to 20×20. They come together to form 20 huge, colourful pictures. Puzzles are designed by Conceptis Ltd and were created exclusively for this game.

Extra add-on packs will be released regularly as DLC.