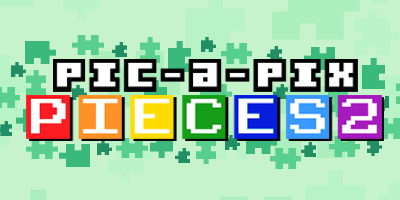 Get a piece of the action with this brand new instalment of the popular picture crossword series!

Pic-a-Pix is a picture logic game, sometimes known as Picross, Nonogram or Hanjie, where whimsical pixel-art pictures are created by solving puzzles.

In Pic-a-Pix Pieces 2, large pictures have been split into a number of smaller pieces. Each piece is a puzzle grid, and by solving them all you’ll form a mosaic that reveals a spectacular final image.

Play alone or solve puzzles with friends! Co-op play supports up to 4 players using any combination of controllers. Touchscreen controls can be used in handheld mode.

There are more than 300 puzzle grids, which come together to form 20 huge, colourful pictures. Puzzles are designed by Conceptis Ltd and were created exclusively for this game.

The PlayStation Vita version of this game has been delayed due to circumstances beyond our control. Cross-buy entitlements are included with the PS4 version in anticipation of its future release.